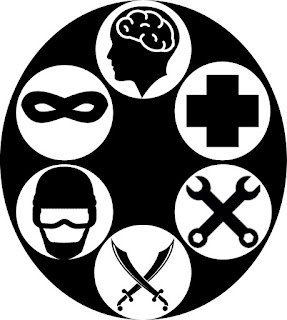 I've got six classes I'm polishing for Star Crawl. Based on playtesting to date, I think they're pretty close to where I want them. Barring any surprises the next few months, I'm pretty confident they won't change much before the final release.

During early design, I wanted to make sure that the Star Crawl classes could stand on their own or alongside DCC & MCC classes. So while there is some skill overlap, I don't think any of these classes are redundant (with the possible exception of the Swashbuckler- more on that below).

Medic: In Star Crawl, casters are rare and mystic healers even more so. While not as powerful healing-wise as a Cleric, the Medic fits well into a world with high-tech healing solutions. In addition to improvised healing options to patch up characters on the fly, Medics get more out of healing items than any other class. So, while anyone can slap on some Derma-Seal, you're much better off if the Medic does it.
Mechanic: I based this class off the sci-fi archetype of the engineer who's able to figure out or fix most anything. They won't likely be found at the front lines of a fight, but they'll have a big impact on a game. In addition to their repair skills, Mechanics have the ability to understand new and unusual concepts better than any other class. And in space combat, they can coax the ship to perform beyond expected limitations.
Psycher: This class is the closest to a caster, with powerful mental abilities and weak physical stats. It is a dangerous class to play, with mishaps and corruption destroying the Psycher's mind over time. I'm still refining the mental abilities, but for playtesting I've been using the mental mutations from MCC.
Scoundrel: Closely related to the Thief, the Scoundrel's skills are less dependent upon Agility. With skills like Grift & Smuggle, characters will need Intelligence and Personality. I see Thief being a commonly available class for Star Crawl, so I kept an eye towards the two being able to work together in a group without too much duplication of skills.
Soldier: While one of the chief combat classes in Star Crawl, the Soldier also shines in support roles. They can assist others with any roll (including damage), increasing their ally's roll by 1 die type. And when Soldiers work together, the senior officer can give bonuses to the other Soldiers. This comes in especially handy for the Recruits a Soldier can gain at higher levels.
Swashbuckler: This is the class most closely aligned with a DCC class (the Halfling). In my DCC experience, the Halfling is a fantastic class and the skillset is great for a fearless hero type. Swashbucklers retain the Luck & Two-Fisted Fighting abilities, but the Sneak skill is gone. Instead, the Swashbuckler can choose a Thief or Scoundrel skill that they'd picked up along their travels.