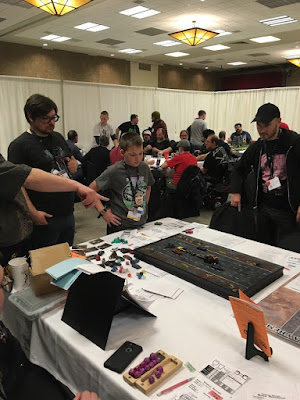 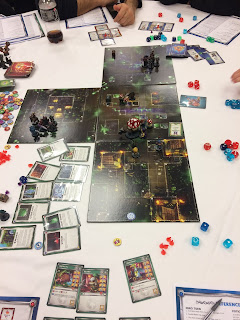 Posted by Jonathan at 7:11 AM No comments:

For those attending GaryCon this weekend, I'll be running games Vehicle Mayhem and Star Crawl.

The first annual Vehicle Mayhem "Disciples of the Wheel" tournament will be held from 4-10:00 pm Friday in Forum AB (table 367). I'll have up to 8 cars on the road at all times: show up any time during that block & jump in when the next car is eliminated!

And Star Crawl will make its convention debut with a session of "Threen Station Zero". I'll be running that 2-6:00 pm on Saturday in Forum AB. The game is full, but feel free to stop by and see the new classes in action. My Saturday evening is open, so if there's demand, I may run a second Star Crawl session off-books after 6:00.

The header image is from my Vehicle Mayhem demo yesterday at Drawbridge Games. Special thanks to Rico for letting me set up and run!
Posted by Jonathan at 6:57 AM No comments: