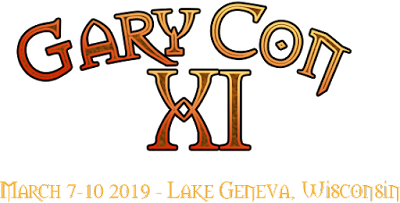 Event submission is open for GaryCon XI, running March 7-10, 2019. GaryCon is by far my favorite gaming convention: it's big enough to offer everything you could want to play, but small enough to avoid becoming a soulless corporate event. I've attended & run games every year since 2014 and I don't intend to break the streak anytime soon.

I've submitted 5 events so far (and I have a secret project I'm working on: if I can pull it together to test in the next month or so, I may add a session of that, too). Three of those are for Star Crawl (one of which is really just DCC XCrawl in space, so not sure that counts?) and two are for Marvel Super Heroes. Here's the tentative schedule:

Thurs, 10-2: DCC Star Crawl- The Promethean Adventure "The Promethean was once a grand and luxurious space liner and its final voyage promises to be a grand event: unfortunately, it won't be the sort the passengers hoped for!
This will be a 0-level DCC funnel in space, using Star Crawl rules."
This is the adventure that's included in the Star Crawl rulebook. There is a lot of room for improv & going off the rails.
Thurs, 2-6: Marvel Super Heroes: Savage Land Under Seige "Ka-Zar and Zabu have always managed to protect the many tribes of the Savage land, but when a new threat approaches, they'll need a little help from their friends!"
For the Marveling at Marvel's Marvel's podcast, I did a lot of research recently into the Savage Land which game me an idea for what I think will be a real good time.
Fri, 10-2: Marvel Super Heroes: The Champions vs The World Crime League "The Champions have built a reputation fighting for justice and freedom across the world. But a secret global crime organization has decided these heroes need to be stopped! Are Kamala, Amadeus, and their teammates up to the challenge?"
I typically stick to "classic" characters for my Marvel games (mostly because the TSR game stats only go up to 1992), but for this one I'll be statting up modern characters: Ms Marvel (Kamala), Brawn (Amadeus Cho's latest identity), young/time displaced Cyclops, Spider-Man (Miles), Viv Vision, and Nova (Sam). I'm only submitting with 6 seast, but I'll have 2 extra characters in case I have any standby players: Ironheart (Riri) and Wasp (Nadia).
Fri, 2-6: DCC XCrawl: Gladiator Moon "The Gladiator Moons of Chardon proudly present X-Crawl! This premier event will pit gladiators against challenges pulled from across the cosmos! Can our challengers survive the deadliest game in the universe?
This no-holds-barred event will use DCC XCrawl rules in the Star Crawl setting. Characters will be provided and rules will be taught."
I'm working with Mike Bolam (architect of the DCC scene in Pittsburgh and overall badass judge) on this adventure. He and I both plan to run sessions of it during GaryCon: it should be a hoot!
Sat, 2-6: DCC Star Crawl- Threen Station Zero "The Threen were wiped out centuries ago, but your crew has a lead on an intact Threen space station. It's surely loaded with valuable relics: but you'll have to beat the Serpine pirates to the prize!
This will be a 2nd-level DCC adventure in space, using Star Crawl rules"
This will be the first standalone adventure I release for Star Crawl. Still not sure if it'll be out in time for GaryCon (really depends on how the Star Crawl release goes), but I've run it a few times as the SC playtesting adventure. I ran it last year at GaryCon for an awesome group & learned a lot from the experience: this year it should  be even better.
Posted by Jonathan at 5:18 AM

Email ThisBlogThis!Share to TwitterShare to FacebookShare to Pinterest
Labels: GaryCon