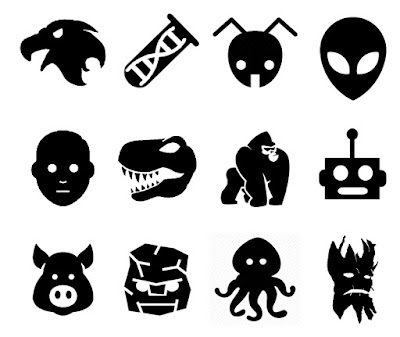 Going into Star Crawl, I absolutely wanted to include alien races. I quickly realized I couldn't do each alien as a class, so I had to figure out a way to introduce races without unbalancing the core DCC rules (after all, a big part of Star Crawl is the ability to smoothly move a DCC campaign into space). At the same time, I wanted to make sure to allow for vast numbers of alien types. The solution I've come up with is the Race Template.
While most sci-fi games clearly define what each alien race is like, Star Crawl does not. When you choose a Race Template, you are just picking a broad template of alien: your character is just one of many sharing some standard attributes. It is up to you, and maybe your judge, to determine what this alien race is actually like.

For example, lets look at Lizards, a staple of many sci-fi & fantasy settings: 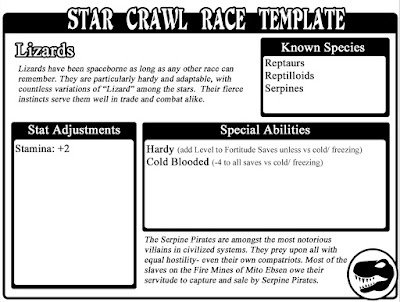 The information and flavor text on the Race Template give some guidance, but from there the sky's the limit. Maybe you've got a "V" alien or a 7-foot tall t-rex. There are some "Known Species" listed, many of which will be detailed in the Star Crawl bestiary, in case the player wants to go with a more standard race. The judge may also wish to make race selection a collaborative experience ("OK guys, all the Space Pigs in this campaign are like Lord of the Rings Orcs"). And since the Star Crawl rules will be completely DCC compatible, there's no reason an adventurous judge couldn't bring these rules into their fantasy campaign.

12 Race Templates will come in the Star Crawl rules and I plan to include more with future adventures & supplements.